Celebrating his 51st year in the swimming pool industry and with experience on over 7000 pools build both nationally and internationally Mike has experience few in the pool Industry have. Mike likes to say he’s only held two jobs in his life. The first one being with the United States Army and serving one year in Vietnam, and the second was when he started in the pool industry in 1968 and worked for a company called Sylvan pools which is now Anthony Sylvan pools one of the largest pool companies in the world, and with them he managed the construction of pools in Iran, Iraq, Saudi Arabia, Japan, England, and most of the states in the United States. Since 1977 Mike has been living and working in the Pensacola & Gulf Breeze communities. Committed to quality products and service, Mike is hands on. His love of the community along the Gulf Coast and excellent work ethic is the driving force of Gulf Breeze Pools & Spas, LLC.

Recently recognized by the Studer Group as a “Difference Maker in the Pensacola Area,” Mike is an active asset to the community. He is the Americanism Chairman for the American Legion Post 378 and the VFW Post 4407 in Gulf Breeze. Mike is also affectionately known as the “Flag Guy” for his installation of the American flags installed along the 3 mile bridge and through Gulf Breeze following the 9-11 attack..

Mike Esmond in the news 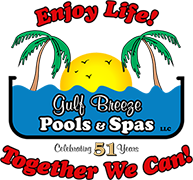